Why Broadway? Here is my “why”.

My family loves Broadway. We love music in general, but especially Broadway musicals. I grew up with theatre in my veins. My mom and dad met at a cast party! Then, my mom went on to found one of the first (maybe the first?) alternative theaters in Louisville, KY. Being in and around sets and actors and costumes is a salient memory from my childhood.

I remember the first musical I ever saw. Evita. Do you remember the scene from Pretty Woman when Julia Roberts’ character had no idea what an opera was but went a long for the ride anyway. Despite never having any exposure to the opera and despite not understanding a word, she was moved to tears and overwhelmed with emotion. That is how I was when I saw Evita. I was very young and could not pos 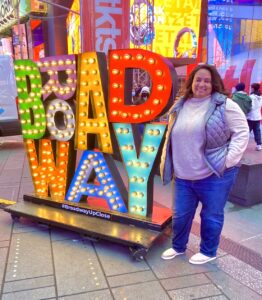 sibly understand all of the dialog in the show, but more than four decades later I can clearly replay scenes from that show in my head.

For my daughter, Kayla Pecchioni, now a Broadway actress, it was Chicago.

For my nephew, Leroy Thompson, now a musical theatre major at Pace University, it was the Lion King.

I think this is the answer to the question, “Why Broadway”. I am a storyteller. I am great at capturing emotion and the motivations of others. I want to move people. I want people to be inspired. I want to make art that people never forget. I want to humanize the marginalized stories of others and make people think. I want to make people love a show so much they don’t want to part after seeing it. They decide to walk across the street to get a cup of coffee and a slice of cheesecake and keep the conversation going. I want to give something to others that reminds them of the goodness we can find here in this life. I want to leave something behind. But more than anything, I want to show people that ordinary people can do extraordinary things when they believe.

I know it is an uphill climb. I know it will be an insane amount of work. I know it’s crazy, but crazy things also called miracles happen every day. I’ve seen it. Of all the things I have achieved, I recognize that this may very well be the one thing I attempt that does not happen and that is scary, but that makes me want to move with even more force to bring this dream to life.

Life was not made for us to get through or to merely survive. Life

was made for us to find our passion and leave something behind. Make some corner better whether it is a field of wildflowers, a thought-provoking book, or a Broadway show that will surely inspire others to listen to their heart and follow their dreams. This is my answer to the question, “Why Broadway”. If you read this and have a dream, I want to inspire you now, in this moment, to just take the next step. Your dreams are given to you for a reason. Your dreams are meant to be.